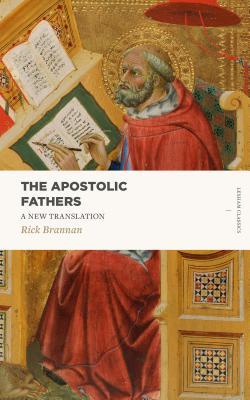 Rick Brannan is the author of Lexical Commentary on the Pastoral Epistles: First Timothyand Second Timothy: Notes on Grammar, Syntax, and Structure, both published in 2016 by Appian Way Press. Brannan is also the general editor of the Lexham English Septuagint, an editor for the Lexham English Bible, as well as the contributor of the introduction and translation of John and the Robberin the opening volume of New Testament Apocrypha: More Noncanonical Scriptures(Eerdmans, 2016) by Tony Burke and Brent Landau. Most recently, Lexham Press has finally published Brannan’s translation of the Apostolic Fathers.

The Apostolic Fathers: A New Translation is a fresh and readable alternative to some of the more widely used contemporary translations of the Apostolic Fathers, particularly The Apostolic Fathers in English by Michael W. Holmes (3rd ed., Baker Academic, 2006) and The Apostolic Fathersby Bart D. Ehrman (2 vol., Harvard University Press, 2003). Brannan has provided, to use translation-speak, an “essentially literal” representation of Kirsopp Lake’s Greek text. Lake’s Latin text is also used where it is applicable, including some portions of Polycarp to the Philippiansand the Shepherd of Hermas. Additionally, most areas in the text where differences tend to surface between Lake and other available Greek texts (e.g Holmes, Lightfoot, and Ehrman), Brannan is careful to discuss such within the numerous notes that saturate the volume. These notes in the translation appear to have been curated from various sources and offer readers with cross-references, translational notes, textual critical issues, and lexical oriented discussions.

Those previously acquainted with the writings of the Apostolic Fathers will be familiar with the various works included here. The material was composed in the centuries immediately following the Apostles and the type of literature ranges from letters and epistolary writings to theological tracts and apocalyptic literature. Outside the New Testament and various writings from within Second Temple Judaism, these writings are the most important sources for understanding the rise and development of early Christianity. Brannan has provided students and scholars with a clear and readable translation that synthesizes the most up-to-date research (personal and other peer-reviewed works) into its many translation notes. But, for me, apart from the notes and readability of the translation, I found the typeset and presentation of the work to be unparalleled. It’s absolutely beautiful and really does cultivate a desire to sit down and read. The only thing that would make it better, in my opinion, is a cloth-over-board hardcover binding and the inclusion of the original language text on the opposing page. At the very least, this volume deserves a sturdier binding—something that is a bit more functional for the type of use it will receive as it is likely going to be read and used often.

The Apostolic Fathers: A New Translation by Rick Brannan is remarkable. Not only is the translation readable and fresh, but the presentation is among the best on the market. I know that Brannan didn’t intend to replace Holmes or Ehrman, but this volume should be viewed as a very strong contender. So, if you are looking for an inexpensive alternative to the above-mentioned authors—a translation that is readable and easy on the eyes—then Brannan’s translation couldn’t be recommended more highly!