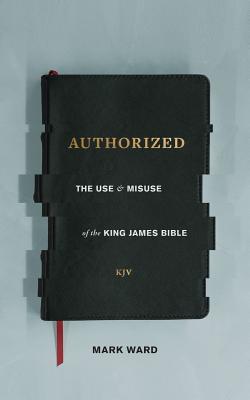 Mark Ward is a Logos Pro who writes weekly on Bible study for the Logos Talk Blog training users in the use of Logos Bible Software. He has a PhD in New Testament Interpretation from Bob Jones University and is the author of several high school Bible textbooks, including Biblical Worldview: Creation, Fall, Redemption(BJU Press, 2016). Most recently, Ward has published a helpful and balanced little book on the King James Bible.

Authorized: The Use and Misuse of the King James Bible is a generous and well-informed exploration into the most widely used Bible translation today (55% of readers, according to Ward, continue to seek out the KJV when looking for an English Bible translation). Ward doesn’t have an agenda to slander the KJV nor does he simply recycle weak arguments against its use. In fact, Ward begins with an excellent chapter on what the Church loses if the KJV stops being used. Agree with his assessment or not, this starting point is to be applauded and appreciated by serious and objective readers. Ward’s primary concern, and it’s a valid concern, is that the KJV is not a vernacular translation of the Bible. It is not written in a language that is spoken, read, or understood by the average English-speaking world. In fact, as Ward brilliantly displays, it is full of language that is not only outdated and obsolete but also includes many familiar words that have changed their meaning (i.e. “want” in Ps. 23:1; “halt” in 1 Kgs. 18:21; “commendeth” in Rm. 5:8; “apt” in 1Tm. 3:2). Ward (rightly) encourages readers to use a variety of translations and avoid the myth of a “Best” English translation.

Authorized is a short and enjoyable read. I finished it in a single sitting with absolutely no regrets. Ward is both readable and relatable. His approach to the subject is unique and filled with grace. It was honestly refreshing. I found the material to be engaging and presented in a manner that encourages reflection. I especially appreciated Ward’s linguistic focus, particularly surrounding “dead words” and “False Friends” as they relate to the KJV and contemporary English. I also appreciate and echo Ward’s conclusion to use multiple translations and avoid the temptation of believing in a “Best” translation. Where I think Ward could have added more to the volume, although I acknowledge that a comprehensive investigation is outside of the scope here, is in the arena of textual criticism and the textual reliability of the KJV. That said I’m more than happy with the balance and focus of the volume. I think it adds to the conversation from an angle that is often overlooked.

Authorized: The Use and Misuse of the King James Bible by Mark Ward is a fantastic volume. It’s brief, easy to read, and packs an explosion of thought-provoking material. Readers will appreciate the gracious tone of the volume and the care that Ward has taken to inform without insulting. Of course, given the nature of the emotional investment, there will still be those unable to reconcile detachment with the KJV despite the sound advice provided by Ward here. This was an excellent book! It comes highly recommended and should find its home on the shelf next to The King James Version Debate: A Plea for Realism by D. A. Carson and The King James Only Controversy: Can You Trust Modern Translations? by James R. White.

One thought on “Review: Authorized”