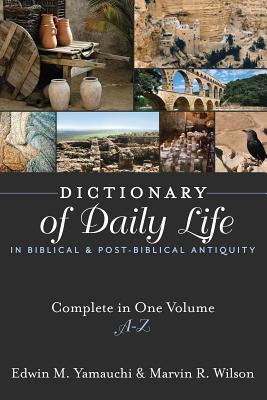 The landscape of specialized biblical and theological dictionaries seems to experience continual growth year-by-year. These dictionaries generally boast more focused and detailed attention on content and tend to provide a more unique product as an end goal. The level of usefulness of these types of dictionaries can vary greatly depending on the academic or personal interest of the reader, as well as the specializations of the contributing roster. Still, because of the distinctive qualities of such works the price-point is generally out of reach for most consumers. The intersection of such usefulness and availability is tellingly rare in this distinctive reference genre, and thus when it is clearly observed attention should be widely merited.

Originally published as four paperback volumes, The Dictionary of Daily Life in Biblical and Post-Biblical Antiquity edited by Edwin M. Yamauchi and Marvin R. Wilson has now arrived as a single-volume resource lodged in a beautiful hardcover binding. DDL is a landmark resource in the field of biblical studies. It truly is one of those unique cases, like that mentioned above, where the usefulness and availability of the resource intersect at almost every point. This new single-volume edition is jam-packed with both valuable and vital information for understanding the biblical world of the Old Testament and the New. Furthermore, the sheer affordability of DDL should almost guarantee that the intentions of the editors and contributors can be enjoyed by both scholar and interested laity alike.

DDL contains a number of important and unique articles related to the domestic life, technology, culture, laws, and religious practices of the ancient world. While other top-tier multi-volume dictionaries (Anchor Yale Bible Dictionary, International Standard Encyclopedia of the Bible, etc.) may interact with similar themes and topics as DDL, it would be rare to see them interacting with the same level of detail as DDL, and certainly not in the same helpful format. This complete one-volume edition of DDL includes the same content from the four-volume set, including exhaustive essays unparalleled in other major dictionaries. For example, the DDL article on Abortion is near twice the length of that found in AYBD. The DDL article on dancing is nearly seven times the length of that found in ISBE—an article not even found in AYBD. There is a fascinating 20-page article on Death & Afterlife, as well as a 23-page article on Human Sacrifice. By comparison, ISBE has an article on Human Sacrifice that is roughly 3-pages, and AYBD doesn’t have such article at all. Other relevant and noteworthy articles include Incense, Nursing and Wet Nursing, Marriage, Names, Oaths & Vows, Wild Animals and Hunting, Same-Sex Relations, and Slavery.

The strong points of DDL are discovered in at least three major benefits for the reader. First, the sheer scope and comprehensive nature of each article is unique even among some of the other major, top-tier dictionaries (as noted above). So, while other works may occasionally have similar articles as DDL, they are generally much briefer in scope than that offered in DDL. Second, the organization of each article cultivates a much broader comprehension of the subject matter discussed. Each article opens with a brief summary, followed by six major sections: (1) The Old Testament, (2) The New Testament, (3) The Ancient New Eastern World, (4) The Greco-Roman World, (5) The Jewish World, and (6) The Christian World. Thus, DDL tends to trace the topic of discussion much further (approximately 2000 BC to AD 600) and across a broader scope of cultural boundaries. Lastly, each article concludes with a healthy and up-to-date bibliography that is intentionally curated to catapult the curious reader in the right direction—something that is certain to awaken excitement in fellow bibliography lovers.

The Dictionary of Daily Life in Biblical and Post-Biblical Antiquity is a phenomenal achievement in the field of biblical studies. Edwin M. Yamauchi and Marvin R. Wilson have helpfully gathered together some of the most important information about the ancient world and packaged it in such a way to make it accessible and understandable to the average reader. From the far-reaching scope of the articles to the comprehensive exploration therein, DDL is a useful and affordable resource that merits immediate attention from any serious student of the Bible. I couldn’t think of a better reason to invest in this resource today. This is a resource you will use and consult often.

One thought on “Review: Dictionary of Daily Life in Biblical and Post-Biblical Antiquity”