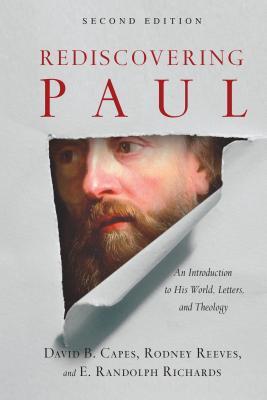 Rediscovering Paul: An Introduction to His World, Letters and Theology by David B. Capes, Rodney Reeves, and E. Randolph Richards is a unique resource that offers itself as a manageably sized textbook aiming to tackle a number of key Pauline related introductory matters in a single volume. Capes, Reeves, and Richards guide the reader through an analysis of Paul’s background, an introduction to the letters and a survey of the ministry surrounding Paul’s letters, and an integrated study of Paul’s theology and spirituality. Now, with the recent release of a second edition, Capes, Reeves, and Richards bring a welcomed update and revision to an increasingly useful introductory textbook.

Capes, Reeves, and Richards do much to strip away many of the preconceived notions that readers may have concerning Paul (particularly Western interpretive influences). But more than simply deconstruct the readers understanding, Capes, Reeves, and Richards offer a new set of lenses guided by a biblically informed and contextually sensitive worldview. Rediscovering Paul begins with a biographical approach in the initial two chapters, providing readers with a background to the Apostle and his conversion. Next, Capes, Reeves, and Richards discuss Paul as a writer and the nature of his epistolary corpus, before the reader’s attention is turned towards his writings. Lastly, attention is directed towards the life, impact, and legacy of Paul’s theology and spirituality. Throughout, the readers will discover “So What?” and “What’s More” sections that provide further detail and application to specific topics. These have been revised and expanded in the second edition. Additionally, most of the chapters in the book conclude with a “Read More About It” section, including a brief list of recommended resources and a list of relevant articles from the Dictionary of Paul and His Letters (IVP, 1993).

There is much to be praised about Rediscovering Paul. First and foremost, as with the previous edition, the authors have done a fantastic job synthesizing and updating the need to know information relevant in an introductory textbook. Both teachers and students should rejoice in their collective effort. Second, the updates included in the second edition provide readers interaction with many recent conversations within the arena of Pauline studies. Interestingly, readers are afforded an opportunity to observe some of the updated conversation if they follow the recommended articles from the Dictionary of Paul and His Letters, which is nearly twenty-five years old now. Third, the intentionality of the authors to connect readers to the world of Paul is refreshing. It will be difficult to have read this volume without learning something new about the Apostle and not being challenged along the way.

The second edition of Rediscovering Paul: An Introduction to His World, Letters and Theology by David B. Capes, Rodney Reeves, and E. Randolph Richards is to be both welcomed and celebrated. Capes, Reeves, and Richards have refined, expanded, and updated a book that has impacted many, and influenced many more. Rediscovering Paul is an introductory investigation that guides readers through the deep forest of contemporary Pauline studies. It’s well-written, appropriately challenging, and surprisingly enjoyable. If you are looking for a recent book on Paul that will rightly orient you towards the Apostle and everything that made him tick, then Rediscovering Paul: An Introduction to His World, Letters and Theology couldn’t be recommended more!    Just make sure to grab the Dictionary of Paul and His Letters while you’re at it.