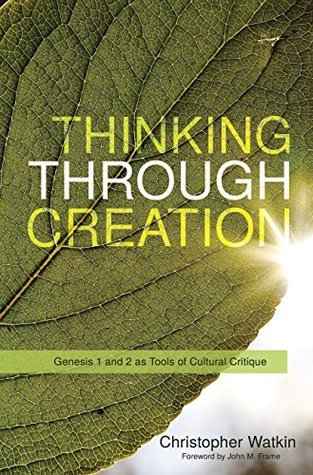 Chris Watkin is a senior lecturer at Monash University in Melbourne, Australia. Watkin received an MPhil and PhD from Jesus College, Cambridge, and is the author of several books, including Phenomenology or Deconstruction? The Question of Ontology in Maurice Merleau-Ponty, Paul Ricœur and Jean-Luc Nancy (Edinburgh University Press, 2009), From Plato to Postmodernism: The Story of Western Culture Through Philosophy, Literature and Art (Bristol Classical Press, 2011), and Difficult Atheism: Post-Theological Thinking in Alain Badiou, Jean-Luc Nancy and Quentin Meillassoux (Edinburgh University Press, 2013). Most recently, Watkin has written a worldview masterpiece established upon some of the most well-known passages of Scripture—using Genesis 1-2 as worldview lenses to critique and inform cultural engagement.

Thinking Through Creation: Genesis 1 and 2 as Tools of Cultural Critique surfaced out of the realization that a full-orbed contemporary articulation of Christianity must not only explain the Bible to our culture but also explain our culture through the Bible (p. xiii). For Watkin, Thinking Through Creation provides readers “a vision of biblical doctrine not as a series of facts but as a framework for understanding any facts whatsoever, approaching the Bible not as story within reality but as the story of reality, and as the reality itself within which any other stories must necessarily exist” (p. 12). Watkin’s approach is threefold as he establishes his presuppositional structure in Genesis 1-2, including thinking our culture through (1) the Trinity, (2) the creation of the world in Genesis 1, and (3) the creation of humanity in Genesis 2. Watkin does much for the reader as he skillfully uncovers biblical patterns that penetrate many culturally constructed false dichotomies—deficient conflicts that emerge as the truth of Scripture, especially the foundational doctrines of Genesis 1-2, become lenses to analyze the world.

Thinking Through Creation is a fascinating volume. Watkin is a first-rate thinker and presents a clear and persuasive case for recognizing Genesis 1-2 as a vital passage for Christian worldview analysis. The approach is presented in a thoroughly Reformed manner and Watkin has done the reader a great service as he practically applies presuppositional thought to the subject matter. Watkin finds the Trinity to be the establishment of all relational endeavors that exist and does much to see the implications of such on all aspects of cultural engagement. Watkin has provided readers with a unique combination of thought-provoking content that is able shape how one views the world and accessibility which allows such shaping to be experienced far and wide. Thinking Through Creation: Genesis 1 and 2 as Tools of Cultural Critique by Chris Watkin is incredibly helpful and tediously informed, and readers will do well to listen. It comes highly recommended!

One thought on “Review: Thinking Through Creation”