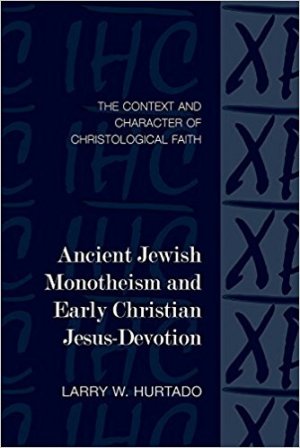 Larry W. Hurtado is Emeritus Professor of New Testament Language, Literature and Theology in the School of Divinity at the University of Edinburgh. Hurtado has authored numerous books related to early Christology and New Testament studies, including Lord Jesus Christ: Devotion to Jesus in Earliest Christianity and The Earliest Christian Artifacts: Manuscripts and Christian Origins. Most recently, Hurtado has brought together a curated collection of 32 essays on early Christian devotion to Jesus in the massive tome Ancient Jewish Monotheism and Early Christian Jesus-Devotion: The Context and Character of Christological Faith.

Ancient Jewish Monotheism and Early Christian Jesus-Devotion is the outcome of nearly forty years of research on the origins of the Jesus-devotion. Each essay has been previously published elsewhere, but none together in a tome of this caliber and scope. The structure of Ancient Jewish Monotheism and Early Christian Jesus-Devotion is thematic rather than chronological (though a date of composition is provided for each essay) and divided into four major parts: (1) The Scholarly Context, (2) The Ancient Jewish Context, (3) Explanations, and (4) Expressions. The initial sections provide contextual engagement with the scholarly landscape and ancient Jewish belief. Hurtado includes essays engaging Wilhelm Bousset, Rudolf Bultmann, N. T. Wright, and Richard Bauckham. Hurtado is able to familiarize the reader with the direction of his lifework within the longstanding scholarly engagement on the subject. Moreover, Hurtado positions the discussion within the background of ancient Judaism, particularly Second Temple Judaism.

The remaining two sections comprise the majority of the content in Ancient Jewish Monotheism and Early Christian Jesus-Devotion. Hurtado rightly provides several essays directed towards a historical explanation for the development of earliest Jesus-devotion in Second Temple Judaism. Those familiar with the discussion will recognize the importance of such for Hurtado’s thesis in relation to the broader scholarly conversation. Lastly, the majority of essays in the book tend to be grouped together around particular expressions of earliest devotion to Jesus (19 total essays). It is here that most readers will appreciate the collection of Hurtado’s work, as the essays offer a comprehensive portrait of a lifelong devotion to the subject matter. Hurtado includes an essay on Philippians 2:5-11 and contends that the text presents Jesus as both the unique Lord and example of self-offering and obedience to be emulated by believers. There are also two important essays on the “dyadic” or “binitarian” patter of early Jesus devotion, as well as various essays that stretch the length of the New Testament and into the early Christian Church.

Each of the essays in Ancient Jewish Monotheism and Early Christian Jesus-Devotion have been previously published in various contexts across four decades. That said, while accessible within various journals and multivolume works, nothing of this scope has been made available to students of the New Testament until now. Those familiar with Hurtado’s lifework will be thrilled to find a volume of this scope. Not to mention such an affordable volume! Not only is this collection a must-have for serious students of the New Testament, but there is virtually no excuse not to have it at only $40. Hurtado is consistently thoughtful when it comes to historical matters and lucidly clear as textual concerns are used to establish his conclusions. Ancient Jewish Monotheism and Early Christian Jesus-Devotion: The Context and Character of Christological Faith by Larry W. Hurtado comes highly recommended!