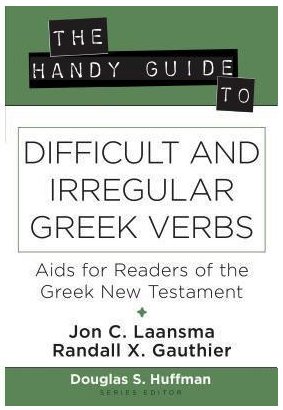 There are few aspects of New Testament Greek more problematic for students and professors than difficult and irregular verbs. Not only are they challenging to identify and memorize for students, but they are largely avoided or underemphasized in the classroom. What has been needed for some time is a concise resource that students and professors can use as a supplement to the traditional Greek grammar. The Handy Guide to Difficult and Irregular Greek Verbs: Aids for Readers of the Greek New Testament by Jon C. Laansma and Randall X. Gauthier offers this much-needed reference tool in a brief and useful package.

The goal of The Handy Guide to Difficult and Irregular Greek Verbs is to provide readers with a vocabulary assistance not found in other resources. The book is divided into two major sections: (1) a frequency list of difficult and irregular principal parts and (2) an alphabetical list of verbs with their compounds. There are also two appendixes, including paradigms of εἰμί and ἵημι in the present and imperfect forms and more. The organization of the volume is superb and the layout is similar to the previous volume in the series—The Handy Guide to New Testament Greek by Douglas S. Huffman.

The most useful part of The Handy Guide to Difficult and Irregular Greek Verbs is the frequency list. This allows readers to quickly familiarize themselves with the most frequently difficult and irregular verbs found in the New Testament, thus foraging a well-traveled path to future mastery of the language. The alphabetical list is equally useful, but more so for potential reference than memorization. The only deficiency is the lack of New Testament examples or verse references. While likely outside the scope of the editor’s intention, it would have been a welcomed addition to have verse references and examples to connect the reader back to the Greek New Testament.

The Handy Guide to Difficult and Irregular Greek Verbs: Aids for Readers of the Greek New Testament by Jon C. Laansma and Randall X. Gauthier is an essential resource that needs to be in the hands of every student of the Greek New Testament. It will be a go-to reference for both students and professors for the foreseeable future and will be used often. It couldn’t be more strongly recommended!