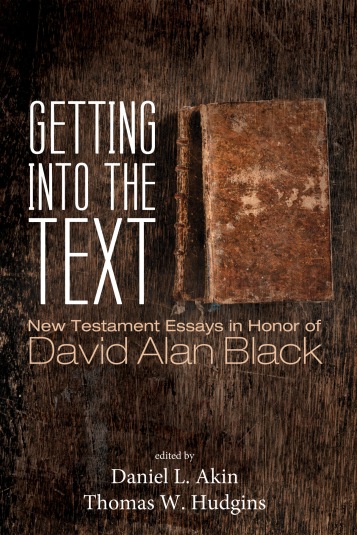 Getting Into the Text: New Testament Essays in Honor of David Alan Black edited by Daniel L. Akin and Thomas W. Hudgins is an attractive collection of essays by a top-tier list of scholarly contributors. The contributors include Stanley E. Porter, Constantine R. Campbell, J. K. Elliott, Tommy Wasserman, Maurice Robinson, and Steven H. Levinsohn. Most of the essays focus on aspects of New Testament Greek or textual criticism, but there are a few essays on the Synoptic Gospels and other areas of interest. The editors did an exceptional job in this volume selecting the contributors to ensure that the topics covered would reflect the longstanding academic career of David Alan Black.

The festschrift begins with a brief introduction to the life and ministry of David Alan Black by Thomas W. Hudgins. Hudgins orients readers towards Black and the impact of his work, which is followed by an 8-page listing of his published works. Each of the essays that follow do well to honor Black in the topic discussed. This is especially present in the methodology used to arrive at various conclusions. The essays were fairly balanced in their worth, but readers are going to be drawn to specific areas of interest and determine such value for themselves. I enjoyed most of the essays for different reasons. But, I was especially encouraged by the essays related to textual critical matters. Elliott, Wasserman, and Robinson offer important contributions worth the price of the book alone. I looked forward to reading Levinsohn’s essay, as I have appreciated his work in the past, but unfortunately was unable do to it being written in Spanish. Christian-B.Amphoux also has a Spanish essay.

Festschrifts tend to be hit or miss. It’s extremely difficult to get a capable group of contributors together to offer an adequate representation of a figure such as David Alan Black. The influence and legacy of this man is far-reaching and instrumental. Getting Into the Text: New Testament Essays in Honor of David Alan Black edited by Daniel L. Akin and Thomas W. Hudgins is not only a great representation of Black’s lifework, it’s a wonderful sample of how he has graciously served the academic community. If you are a fan of Black, a student of New Testament Greek, or an avid enthusiast on matters pertaining to textual criticism, then there is little reason to overlook this volume. It’s wonderfully done and thoroughly contemplated, and I couldn’t recommend it more strongly!

Thankfully Wipf & Stock Publishers has graciously given readers of Sojourner Theology 40% OFF the retail price of Getting Into the Text when they use the coupon code sojotheo between now and November 1, 2017. You now have no excuse!

One thought on “Review: Getting Into the Text”