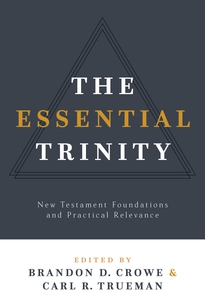 The Essential Trinity: New Testament Foundations and Practical Relevance edited by Brandon D. Crowe and Carl R. Trueman is a collection of essays by leading New Testament scholars and theologians who have built a career upon the importance of the Trinity to Christian doctrine— including well-known individuals, such as Richard Bauckham, Benjamin L. Gladd, and Michael Reeves. The essays offer a biblical-theological exploration through the New Testament and culminate with a number of essays that survey the practical relevance of the Trinity in the Christian life.

The Essential Trinity is naturally divided into the two parts detailed within its subtitle: (1) New Testament foundations and (2) practical relevance. The initial part comprises the majority of the book and each chapter takes on a specific New Testament subcorpus. For example, Brandon D. Crowe addresses the Trinity in the Gospel of Mark and Brian S. Rosner takes up Paul and the Trinity. The entire New Testament is handled in eight essays and the initial section closes with a brief essay on the Trinity and the Old Testament. The second section brings the exegetical rigor to a much-needed culmination with essays on the relevance of the Trinity to prayer, revelation, worship, and preaching. The second section does much to establish the widespread importance of Trinitarian theology to nearly every aspect of Christian existence.

The book itself is a refreshing treasure-trove of exegetical riches. The overall presentation and organization of the book is superb, and readers will appreciate the level of detail explored as a consistent witness is uncovered across the New Testament. Bauckham’s essay on the Gospel of John was phenomenal, as most will expect. That said, Jonathan I. Griffiths’ essay on Hebrews was among the best in the book. It is worth the price of the alone. Recognizing the scope of the volume as a New Testament engagement, readers should evaluate the major shortcoming of the book as minimally impactful—a lack of Old Testament engagement. There was a clears sense in the book of the value and importance of the Old Testament to the New Testament foundation that was explored, and some authors explicitly brought such into their essay (e.g. Benjamin Gladd on Revelation). It would have been extremely useful to see further exploration of the Old Testament Trinitarian themes that include Old Testament scholars both exploring shadows of the concept and putting to rest many of the misconceptions propagated in contemporary Christian thought. Again, this is a major shortcoming of the volume, but also recognizably beyond its scope.

The Essential Trinity: New Testament Foundations and Practical Relevance edited by Brandon D. Crowe and Carl R. Trueman is undoubtedly one of the most useful books on the Trinity in recent years. Apart from the shortcoming mentioned above, it is hard to think of a more well-rounded and exegetically sound engagement on the Trinity. It comes highly recommended!