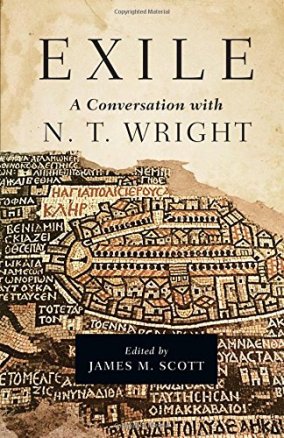 Exile: A Conversation with N. T. Wright edited by James M. Scott brings together 11 scholars from various academic backgrounds and disciplines to interact and engage with a controversial aspect of Wright’s New Testament worldview—an ongoing narrative of exile that underlines the heartbeat of the Second Temple period. Wright has expressed this topic in various forums and has developed it at length in a number of his books, including the magisterial two volume work Paul and the Faithfulness of God (Fortress Press, 2013).

The essays that comprise Exile are mostly edited and expanded from an engagement at Trinity Western University in November 2010. The volume opens with a sizable essay (60 pages) by Wright. This is the lead essay of which the contributing scholars will interact with and engage in the many pages that follow. The book is divided into four parts: (1) Old Testament/Hebrew Bible/Septuagint with essays by Walter Brueggemann, Robert J. V. Hiebert, and Jörn Kiefer; (2) Early Judaism with essays by Philip Alexander, Robert Kugler, and Dorothy M. Peters; (3) New Testament with essays by Scot McKnight, S. A. Cummins, and Timo Eskola; and (4) Theology with essays by Hans Boersma and Ephraim Radner. The volume appropriately gives Wright the final word and includes another sizeable essay in response to the collective work of the above scholars.

Wright’s work is notoriously witty and dense with complexity. The opening essay was a well-articulated and refreshing (re)affirmation of Wright’s exile thesis. The scope of the essay is quite breathtaking given the space, and Wright takes full advantage of the opportunity to explain his case. Wright’s claim isn’t that all Jews believed they were still in exile, but that some did, and Jesus and his followers picked up this belief as a chief resolution of the gospel message. In short, this essay is an essential starting point for both acquainted and non-acquainted readers. Wright has boiled down a lot of thought into these pages, and each and every word matters greatly for the road ahead. The engagement that follows is what many would expect from a multi-authored work, but the overall sense of argument and tone of the book is clear and pointed. The goal of the volume is to further the conversation, and this it most certainly accomplishes. The standout essays include “Not All Gloom and Doom: Positive Interpretations of Exile and Diaspora in the Hebrew Bible and Early Judaism” by Jörn Kiefer, “Exile to the Land: N. T. Wright’s Exile Theory as Organic to Judaism” by Scot McKnight, and all three essays on early Judaism.

Exile: A Conversation with N. T. Wright edited by James M. Scott demonstrates how academic dialog should be given and received. As Wright closes, “these eleven essays, in their different ways, have done what academic conversation ought to do: that is, they have compelled me to think through once more what exactly I have been wanting to say, and (I hope) how to say it more sharply” (p. 332). The only shortcoming of this volume is that some of the contributors assume a certain level of knowledge that some readers may not possess. But, most readers that are picking up a book with such title should know the journey they are about to embark on. It accomplishes its goal of furthering the conversation and I am excited to see where this volume takes us. One can only hope that it’s out of Exile. It comes highly recommended!