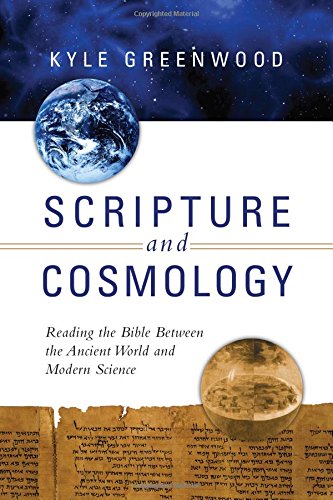 Kyle Greenwood is Associate Professor of Old Testament and Hebrew Language at Colorado Christian University. He earned his M.Div. from Asbury Theological Seminary and his Ph.D. in Hebrew Bible and Ancient Near Eastern Studies from Hebrew Union College. Greenwood is author of several peer-reviewed articles related to ancient Near Eastern studies, contributor to Ancient Israel’s History: An Introduction to Issues and Sources edited by Bill T. Arnold and Richard S. Hess, and the author of ­Scripture and Cosmology: Reading the Bible between the Ancient World and Modern Science (IVP Academic, 2015).

­Scripture and Cosmology is separated into three major sections: (1) Scripture and Cosmos in Cultural Context, (2) Cosmology and Scripture in Historical Context, and (3) Scripture and Science. Greenwood’s top-down approach is both logical and necessary to build the proper framework for the conversation at hand. For Greenwood, context is everything. The entire first section of the book, nearly a third of the total page count, is dedicated to developing an ANE context for understanding the cosmology of the surrounding world, including Egypt, Syria, Mesopotamia, and Israel. The second section details the historical challenges of ANE cosmology and how the Church dealt with the three-tiered (i.e. earth, heavens, and sea) cosmology of the biblical world. The two major worldviews Greenwood discusses are Aristotelian Cosmology (the earth at the center of the universe, with the sun and moon revolving around it) and Copernican Cosmology (the sun at the center, with the earth and everything else revolving around it). The third section is an attempt to offer theological justification for the difference between ANE and the modern scientific cosmologies. Greenwood does an exceptional job connecting the dots for the reader and provides (at least in part) rationale in God meeting the original audience’s cognitive abilities (i.e. “divine accommodation”; 194).

There is much to be praised about Greenwood’s effort in ­Scripture and Cosmology. This is a wellspring of interaction with ANE sources and a fair and balanced treatment of a controversial subject to evangelical circles. Both Greenwood’s approach and organization are suitable for the outcome of this book, and the emphasis that he placed on the ANE context is to be applauded. The subject matter of ­Scripture and Cosmology is generally challenging to digest for the average reader, but Greenwood is both engaging and accessible throughout. Moreover, while readers will inevitably find some disagreement with Greenwood’s conclusions at points due to the nature of the topic, his eagerness to engage the issue and continue to uphold a high view of Scripture is both admirable and praiseworthy. ­Scripture and Cosmology is a thorough survey that will inform and equip readers concerning ANE cosmology. In short, Greenwood is not only qualified for the task established in ­Scripture and Cosmology, but after reading this book, I am confident that he will be preferred.