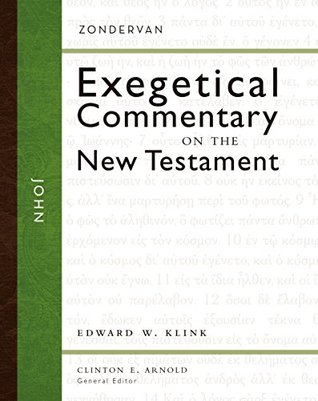 Edward W. Klink III is Associate Professor of New Testament at Talbot School of Theology, Biola University. Klink received a PhD from the University of St. Andrews and is the author of The Sheep of the Fold: The Audience and Origin of the Gospel of John (Cambridge University Press, 2007), Understanding Biblical Theology: A Comparison of Theory and Practice (with Darian R. Lockett; Zondervan, 2012), as well as editor of The Audience of the Gospels: The Origin and Function of the Gospels in Early Christianity (T&T Clark, 2010).  Recently, Klink has produced a massive tome of a commentary on the Fourth Gospel that is certain to become a standard work for pastors and students.

Those acquainted with the ZECNT series will be on familiar ground with Klink’s volume. Klink opens with a sizable introduction that addresses all the standard introductory concerns. However, Klink’s background in both the audience and origin of the Gospel of John provides a useful framework for this section. Klink affirms traditional Johannine authorship (that, John the son of Zebedee, the apostle John, wrote the Fourth Gospel) and dates the Gospel between AD 70-95. In my estimation, for most readers, the introduction and the detail therein is alone worth the cost of the commentary. Klink is meticulous and fair in his assessment, and the reader will reap those rewards quickly.

The commentary proper carries much of the same detail as Klink’s introduction. Each major section of John includes a “Literary Context” section, a “Main Idea” section, followed by a diagramed translation of the text, a “Structure” section, an exegetical outline and explanation of the text, and a “Theology in Application” section. Klink shines in the “Explanation of the Text” and “Theology in Application” sections, and provides readers with a goldmine of exegetical resource. It is clear from his interaction with the text that Klink has spent significant time in both the primary and secondary sources. Klink is mindful of interpretive issues, and yet (for the most part), remains theologically neutral in his exegesis and application of the text. Depending on the needs of the reader, from outline to application, Klink has provided it with both excellence and rigor. There is much to be praised about this volume and Klink is on the receiving end of most of it. The rest is simply the structure and organization of the series.

Zondervan Exegetical Commentary on the New Testament: John by Edward W. Klink III is a massive achievement and a welcomed addition to the ZECNT series. Those acquainted with the series will enjoy Klink’s contribution. For those unfamiliar with the series or Klink, they should not be intimidated by the size and scope of the volume. It is practical where practical is needed, and detailed where detail is needed. In other words, as mentioned above, depending on the need of the reader, Klink has provided it with both excellence and rigor. I have at least two dozen commentaries on the Fourth Gospel, and I can say with confidence (apart from Carson) this volume will be the one I reach for most. It comes highly recommended.