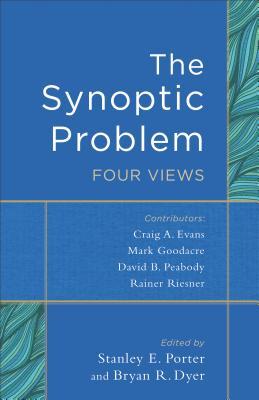 There are few resources more helpful for the eager student than multi-view resource. This is especially the case for complex or contested topics such as the Synoptic Problem. The Synoptic Problem: Four Views edited by Stanley E. Porter and Bryan R. Dyer brings together four well-known and capable minds to establish an up-to-date exploration of an age old debate.

The volume begins with a well-written introduction to the Synoptic Problem. Porter and Dyer usher the reader through much of the “need-to-know” background information to the discussion, introducing key figures and theories, and set the stage for the discussion that follows. If the reader has had little exposure to the Synoptic Problem, the introduction will offer an appropriate starting point.

Craig A. Evans starts the volume with a positive presentation of the Two Source Hypothesis. This was an excellent choice by the editors, as “the Two Source Hypothesis, and its two tenets—Markan priority and Q—is probably still the majority view among New Testament scholars” (p. 26). As such, Evans sets the pace for the essays that follow.

Mark Goodacre follows Evans with a positive presentation of the Farrer Hypothesis. Goodacre shares Evans’ conviction concerning Markan priority. But, where Goodacre differs from Evans is in the acceptance of Q. Goodacre argues that Mark wrote first, then Matthew influenced by Mark, followed by Luke influenced by both Mark and Matthew.

David Barrett Peabody follows Goodacre with a positive presentation of the Two Gospel Hypothesis. It is here that significant distance between Evans is beginning to be observed. Peabody aligns with Goodacre together against Evans in that both deny the necessity and existence of Q. However, Goodacre and Peabody depart at the chronology of composition. Peabody argues that Matthew wrote first, then Luke influenced by Matthew, followed by Mark influenced by both Matthew and Luke.

Rainer Riesner follows Peabody with a presentation of the Oral and Memory Hypothesis. Riesner’s essay is by far the most distinct of the four essays, although the reader will surely discover some overlap with the other essays. Readers will find Riesner’s presentation well-written and clearly argued and uniquely positioned in the volume.

Similar to other multi-view resources on the market, The Synoptic Problem: Four Views includes response essays from each contributor. It is here that the value of the book is most readily available. Each contributor interacts with the other three contributors and further defends their position. That said, unlike other multi-view resources, the response essays do not immediately follow the positive presentation of each hypothesis. The editors have instead sought to allow the readers to interact with the positive presentation before having the contributors respond to each hypothesis in a single essay.

The organization of this volume was a bit of a hurdle for me to start. I’m familiar with the traditional layout of “positive presentation” followed by “response essays,” and I generally prefer such order. That said, after working through the four positive presentations, I began to see the benefit of the editors’ decision here and was actually more prepared to interact alongside of the response essays.

The Synoptic Problem: Four Views edited by Stanley E. Porter and Bryan R. Dyer is a much needed volume in an ongoing conversation that shows little sign of slowing down. It deserves wholehearted welcome and will prove immensely useful for teachers and students of the New Testament. If you are looking for an up-to-date and balanced examination of the Synoptic Problem for classroom or casual reading, then look no further. This volume comes highly recommended!

One thought on “Review: The Synoptic Problem: Four Views”