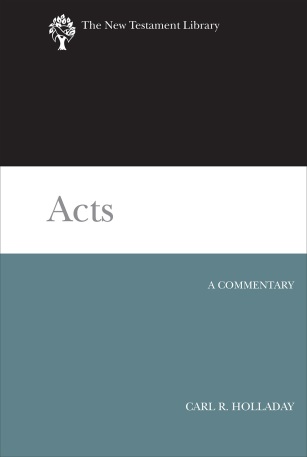 Carl R. Holladay is C.H. Candler Professor of New Testament at Candler School of Theology, Emory University. Holladay received his ThM from Princeton Theological Seminary and PhD from the University of Cambridge. He is the author of a number of books, including Biblical Exegesis: A Beginner’s Handbook, Third Edition (co-authored with John H. Hayes) and A Critical Introduction to the New Testament: Interpreting the Message and Meaning of Jesus Christ. Most recently, Holladay joined the ranks of the highly acclaimed New Testament Library series with his much anticipated commentary on Acts.

Acts: A Commentary is by far one of the best volumes to come out of the New Testament Library series in some time. The commentary begins with a massive, 70-page introduction that covers all the standard introductory matters with clarity and precision. Holladay is aligned with the critical consensus on almost all matters of composition and integrity. Holladay settles that the author is distinct from the Gospel of Luke, “possibly, but not certainly, Luke the physician” (p. 4). Further, Holladay pushes the date of composition to the late 90s to early 100s. An exciting addition to this volume was the extensive discussion surrounding the textual history and manuscript evidence for the Book of Acts, including discussion on the four textual groups, Codex Bezae, and theories of textual traditions. This section accompanies the numerous textual notes found in his translation of Acts throughout the length of the volume. Holladay also has extensive discussion on the literary structure, major themes, and narrative unity of the book. This was easily one of the best introductions that I have found in the New Testament Library series and possibly one of the most useful introductions from a critical perspective that I have encountered to date.

The commentary proper is clearly written and judiciously presented. Holladay is particularly keen on acknowledging OT and LXX parallels, and interacts with secondary sources often. The entire commentary is outstanding and informative, and my guess is that it will quickly find its way near the top of the ranks in no time. The benefits of this volume are numerous, but at least two features deserve mention here. First, and probably foremost, like the other volumes in the New Testament Library series, Holladay provides the reader with an original translation and ample textual notes. Holladay is excellent in this regard, and his attention to textual matters in the introduction of the book provides reassurance that he has vetted out the issues with care. I have stated this before and I will state it again, I have continually found this to be one of the most helpful features of the New Testament Library series, and Holladay does not disappoint. Second, the exegetical handling of the text is thorough, pointed, and rather rich with background information. Holladay demonstrates a keen awareness of the historical and theological issues and seeks to firmly ground them in the text.

Acts: A Commentary by Carl R. Holladay is clear and to-the-point in his exegesis. The attention to the textual details and historical matters makes Holladay’s volume a worthwhile investment. The introduction alone is worth the price of the book. If you are looking for a commentary on the Book of Acts that brings fresh critical eyes to the conversation, this volume will be a volume worth utilizing and doing so often. It comes highly recommended!