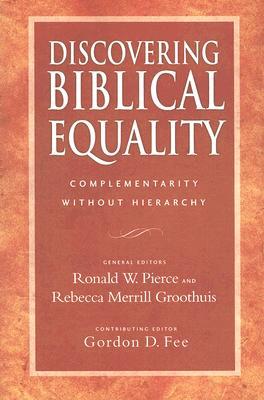 The role of women in ministry has been a debated topic within evangelical circles for over a century. Numerous books and articles have been written on both sides of the issue—some more helpful than others. Discovering Biblical Equality: Complementary Without Hierarchy edited by Ronald W. Pierce, Rebecca Merrill Groothuis, and Gordon D. Fee is unquestionably one of the most accommodating defenses of biblical equality or egalitarianism one the market today.

Discovering Biblical Equality is a collaborative effort of some of the most well-known and respected biblical scholars and theologians associated with the egalitarian position, including the likes of Richard Hess, Gordon Fee, Craig Keener, I. Howard Marshall, and much more. Divided into five major sections, Discovering Biblical Equality addresses historical, biblical, theological, cultural, and practical issues related to the ongoing debate. Each of the major sections includes several articles on various topics or sub-issues, and each is aligned with appropriate contributors for the specific matter addressed. Like nearly all multi-authored works, some articles are more helpful than others. However, Discovering Biblical Equality is well-rounded in its choice of topics and contributors, and thus, fairs better than similar multi-authored works.

As someone who identifies as a complementarian (the position that this book is arguing against), I found myself in fundamental disagreement with almost every article (which was expected before engaging with it). However, I was thoroughly impressed with the level of interaction with the other side that is present in this volume. A number of articles stood out, including Craig Keener’s treatment of 1 Corinthians 14:34-35, Richard Hess’ treatment of Genesis 1-3, Linda Belleville’s treatment of 1 Timothy 2:11-15, Kevin Giles’ treatment on the subordination of Christ and the subordination of women, and Gordon Fee’s treatment on hermeneutics and the gender debate. That said, from what I can tell, nearly everything in this book has been addressed from the complementarian side prior to its publication (see Evangelical Feminism and Biblical Truth by Wayne Grudem).

Discovering Biblical Equality: Complementary without Hierarchy edited by Ronald W. Pierce, Rebecca Merrill Groothuis, and Gordon D. Fee is a worthwhile investment for anyone interested in the gender debate. The editors have brought together the best in the field to tackle the most pressing questions driving the discussion. While it may not be groundbreaking by way of new argumentation or evidence, Discovering Biblical Equality is clearly established as the best introductory work from an egalitarian perspective. It comes highly recommended!