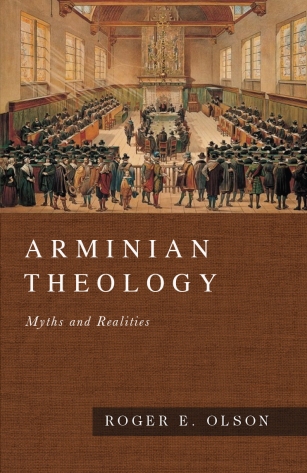 Arminian Theology: Myths and Realities by Roger E. Olson has bridged a much-needed gap in the theological community for nearly a decade. This is especially the case for those who are deeply engaged in the age-old discussion between Calvinists and Arminians. As is frequently the case in these sorts of discussions, the two sides of the debate tend to approach the subject matter without a preexisting desire to accurately understand the other’s theological system. This reality has unfortunately brought about a countless number of myths and misunderstandings on both sides of the discussion. It is here that Olson has provided an exploration that promises to find relevancy for readers of all theological persuasions.

The book begins with a brief introduction to set the stage. Olson does well in turning the reader towards the historical narrative of Arminian theology and allows the observation of its rootedness in the history of Christianity to become the foundation of the content that follows. Olson’s purpose is, “to correctly delineate true Arminian theology and to begin to undo the damage that has been done to this theological heritage, both by critics and friends” (43). This attempt to provide clarification to Arminian theology is separated by 10 myths commonplace within the overall conversation among Calvinists and Arminians. Each of these 10 myths are addressed in detail, and an affirmation of Classical Arminianism is established and explained.

The tone of this book is exceptional and set forth properly in the introduction, as Olson explains, “the purpose of this book is not persuasion (except to a fair understanding of Arminian theology) but information” (43). This desire should resonate with all readers. On a personal note, I was admittedly suspicious about reading this book because of some of Olson’s other books I found to be less than helpful on the same topic. This book, however, was a breath of fresh air in many respects. Olson’s explanation and approach to each of the myths is both charitable and appropriate, and while there is considerable overlap throughout the book as each myth is addressed individually, I continually found the content presented therein to be insightful and informative.

The predominant weakness of the book, and one that I would have liked to have seen be a strength rather than a weakness is the lack of clear documentation concerning the various myths presented. That is, while Olson does provide documentation, it would have been helpful had he attempted to further substantiate the various myths (generally prorogated by Calvinist, although he does mention some Arminian blunders as well) with documented support. This doesn’t mean that I think Olson’s list of myths is wrong or incorrect, quite the contrary. Rather, simply that I would have liked to see more documentation to further evaluate his claims. Additional, while I necessarily wouldn’t consider this a weakness of the book, it must be stated that not all readers (myself included) will find Olson’s defense of such myths to be persuasive and/or representative of Arminianism as a whole.

Arminian Theology: Myths and Realities by Roger E. Olson is a unique example of why clarity and understanding matters in a theological debate. Olson rightly identifies an ongoing problem and sought to bring a much-needed resolution. This is an important book that you will want to read regardless if you are an Arminian or a Calvinist, or neither. It is a book that brings much transparency and thoughtfulness to a discussion that sometimes feels like a dead horse, and something that can’t be continually beat if a dialog is going to progress forward. If you value accurately representing the position that you are arguing for or against, then Arminian Theology is a book that will make that desire into a reality. I don’t know why it took me this long to read it. It comes highly recommended!

One thought on “Review: Arminian Theology”