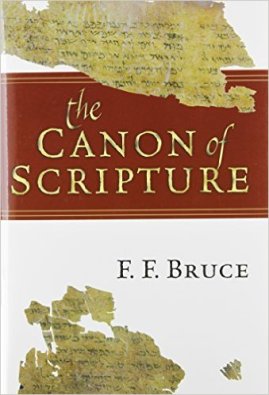 The Canon of Scripture by F. F. Bruce is nothing short of a landmark publication on the subject of the biblical canon. It received two 1990 Christianity Today Awards including The Readers’ Choice Award and The Critics’ Choice Award, as well as a 1989 ECPA Gold Medallion Award. Nowadays, while many readers may be too easily willing to write off The Canon of Scripture as outdated and stale given the current landscape of biblical scholarship, the interaction therein by Bruce still provides much to be commended and praised.

The majority of the book is dedicated to the New Testament canon, and Bruce’s interaction with various Church Fathers therein is commendable. Bruce rightly recognizes that “authority precedes canonicity” when it comes to the New Testament documents (p. 123). In other words, the New Testament documents were already considered canonical prior to the recognition of such because of their authority, not vice versa. Still, Bruce offers six criteria in which the recognition of such books would be considered canonical by the early Church: (1) apostolic authority, (2) antiquity, (3) orthodoxy, (4) catholicity, (5) traditional use, and (6) inspiration (p. 256-269). Bruce’s treatment of the New Testament is much more detailed than the Old, and it is here that the primary usefulness of the book remains for the contemporary reader—especially Bruce’s interaction with the Church Fathers.

One thought on “Review: The Canon of Scripture”