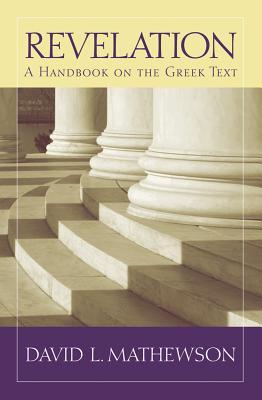 David L. Mathewson is Associate Professor of New Testament at Denver Seminary. Mathewson earned a Ph.D. in New Testament from the University of Aberdeen, Scotland. He is the author of numerous articles and monographs on the book of Revelation, including A New Heaven and a New Earth: The Meaning and Function of the Old Testament in Revelation 21:1-22:5 (Sheffield, 2003) and Verbal Aspect in the Book of Revelation: The Function of Greek Verb Tenses in John’s Apocalypse (Brill, 2010). Most recently, In Revelation: A Handbook on the Greek Text (Baylor University Press, 2016), Mathewson has distilled nearly two decades of scholarly reflection on the Book of Revelation in his long-awaited contribution to the Baylor Handbook on the Greek New Testament (BHGNT) series.

BHGNT has been a breath of fresh air for both scholars, students, and pastors alike. It has provided the reader with a trusted guide through the rigorous trenches of grammatical and textual difficulties, and thus established itself as an initial point of reference for determining the most reliable and readable translation before consulting with commentators. Mathewson’s volume opens with a brief introduction that summarizes some of the most important issues related to the Greek text of the Apocalypse, including, the literary style and genre of Revelation, the language of the Book of Revelation and Semitic influences, verbal aspect, and participles. The handbook proper has broken up the Book of Revelation into approximately 53 units of text (i.e. 1:1-3, 1:4-8, 1:9-20, etc.) where the reader will find an English translation each unit followed by a verse-by-verse analysis of the Greek text—including a detailed examination of relationship of each word, morphology, textual and grammatical issues, and interpretive challenges.

Mathewson’s volume does assume that the reader has, at least, some level of familiarity with the original languages. However, I think the main point of familiarity that is needed for this volume is in the department of grammatical terminology rather than vocabulary or some other aspect of the language. A first-year Greek student will surely be able to navigate the waters, but it may be a good idea to have a Greek grammar to consult along the way for further explanation. Also, there is a short, but helpful glossary of grammatical terms in the rear of the book for immediate assistance. A longer glossary would have been more useful, but the target audience should do well with what has been provided. Furthermore, I think that much more could have been done to make this volume, indeed to make the series more accessible to a broader audience (i.e. more translation of Greek terms and phrases), but, again, the target audience will do well with what has been provided.

Revelation: A Handbook on the Greek Text by David L. Mathewson should be the initial stop for all trained teachers, pastors, and students seeking to communicate the Book of Revelation. This volume has comprehensively compiled much of the groundwork needed to establish a thoughtful understanding of the Apocalypse. It is here that the communicator must begin, and it is here that this volume comes recommended. If you are looking for a guided tour through the marvelous, and sometimes murky waters of the Greek text of the Book of Revelation, this is a volume that you cannot ignore. Pair this volume with G. K. Beale, Robert Mounce, and David E. Aune and you should be ready to take on the world! It comes highly recommended!

One thought on “Review: Revelation (BHGNT)”