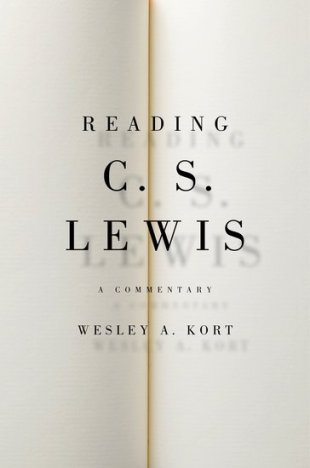 Wesley A. Kort is Professor Emeritus of Religion at Duke University. He holds a Ph.D from the University of Chicago and has received numerous awards, honors, and distinctions throughout his academic career. Kort is the author of the well-received C. S. Lewis Then and Now (Oxford, 2004), where he sought to rehabilitate Lewis to demonstrate the continuing value and relevance of his work today. Most recently, in Reading C. S. Lewis: A Commentary (Oxford, 2015), Kort has delivered yet another excellent volume into the hands of Lewis enthusiasts everywhere. It is here that Kort offers an exciting investigation into some of Lewis’s major works, providing a fresh literary and academic evaluation that has set a new standard for C. S. Lewis studies.

Reading C. S. Lewis begins with an introduction that positions the reader to recognize the cultural milieu of Lewis’s day. Kort does the reader a service by bringing attention to the backdrop of the story before directing the reader towards the material that comprises the remainder of the book—which is organized around three structural components that constitute the framework of Lewis’s project (ix).

First, Kort seeks to independently comment on four of Lewis’s well-known works: Surprised by Joy (1955), The Problem of Pain (1940), The Screwtape Letters (1942), and Mere Christianity (1952). For Kort, these four books display Lewis’s assumptions concerning “basic and important moral and religious matters [that] are and have been generally agreed upon by reasonable people” (109). This is the preliminary structural component of the larger framework mentioned above—Lewis’s philosophical and moral theory. The commentary on each of these works is consistent and helpful throughout, and he often provides insight that would be unknown by the average reader with little exposure to Lewis (myself included).

Second, Kort guides the reader through the next major structural component, namely, Lewis’s cultural critique of modernity. Kort again provides commentary on four of Lewis’s well-known works: Out of the Silent Planet (1938), Perelandra (1943), The Abolition of Man (1944), and The Hideous Strength (1945). For Kort, the critique of modernity expressed in these texts “is sharply focused, well informed, consistent, and both theoretically and practically defended” (189). The reader will likely agree with Kort’s assessment at this point. I was personally intrigued by this section considering Lewis’s interaction within the academy and the cultural shift that was taking place therein. However, I anticipated more interaction by Kort regarding Lewis’s adoration for Dante and his influence on Lewis’s work—especially that of the Space Trilogy.

Third, Kort turns attention to the final structural component of Lewis’s project as he comments on The Lion, the Witch and the Wardobe (1950) and Prince Caspian (1951), The Four Loves (1960), and The Magician’s Nephew (1955) and The Last Battle (1956). Kort explains, “the third component, applied principals, relates to his distinction between principles and their embodiments and, second, to his [Lewis’s] constructive application of moral and doctrinal principals to delineate a worldview that he sees as preferable to its modern, particularly nonreligious, alternatives” (viii). The reader will find the observations that Kort details here both helpful and insightful. I personally found Kort’s discussion on charity within The Four Loves (233-235) to be of great practical significant, and it was full of witty and quotable content.

Reading C. S. Lewis by Wesley A. Kort is a brilliant book by a scholar well-acquainted with Lewis’s life and works. Kort was both fair and generous in his assessment, and the organization of the book was planned well for the interested reader. Some readers, especially those who are more familiar with Lewis’s work, will likely be disappointed in the limited scope of Lewis’s corpus presented here. Moreover, I was personally disappointed by the use of endnotes over footnotes. There is some truly outstanding material lingering in the endnotes of this book and it would have been more readily available for the reader at the bottom of the page. Nevertheless, despite these foreseen issues, it is clear that Kort has provided a commendable volume that is certain to be enjoyed by C. S. Lewis fans everywhere. I recommend it with enthusiasm!