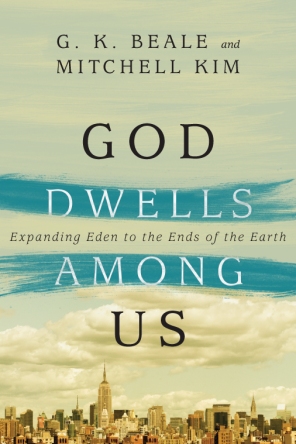 God Dwells Among Us: Expanding Eden to the Ends of the Earth found its beginning in G. K. Beale’s earlier work The Temple and the Church’s Mission: A Biblical Theology of the Dwelling Place of God (IVP Academic, 2004). It is there that Beale develops a fuller exploration of the biblical themes of tabernacle and temple, “from Genesis to Revelation, exploring both the ancient Near Eastern and Second Temple Jewish view of the temple” (p. 7). Co-author Mitchell Kim subsequently developed the aim of Beale’s work into a seven-week sermon series preached at Living Water Alliance Church in Chicagoland. This material was further condensed and distilled into a conference seminar before later being adjusted and released in its present form.

God Dwells Among Us rightly recognizes that the purpose of mankind has always been mission oriented. God has created a people to reflect his presence, character, and image to the ends of the earth as the priests of his dwelling place. This purpose began in Eden, the first temple, and continues into the eschaton as God establishes his eschatological temple among us. God Dwells Among Us opens with three orienting chapters that position the reader within the overall notion of the book. It is here that Beale and Kim present Eden as a temple, with the intended mission of Adam and Eve being to reflect God’s presence to the ends of the earth. The first couple failed, sin entered into the equation, and the mission was reassigned to the Patriarchs and beyond. Beale and Kim then guide the reader through the Mosaic period and the tabernacle as the temporary dwelling place of God, the ministry of the Prophets and promised restoration of Eden, Jesus as the new temple in the gospels, the early Christians as the continuation of the mission to expand Eden to the ends of the earth, and the New Heavens and New Earth as the climax of the Edenic expansion.

The implications of the biblical theme of temple reach into nearly every corner of life in Christ. It is here that Beale and Kim conclude with two important chapters dedicated to the hermeneutical explanation and practical importance of the temple theme previously journeyed. While there is certainly a plethora of practical riches and explanation littered throughout the entirety of the book, it is here that Beale and Kim helpfully connect the dots to the reader by answering anticipated questions and founding the significance of the temple theme into the mission-oriented purpose of mankind. This is likely the most valuable aspect of the entire book. It brings the canonical journey of the temple theme to its necessary conclusion and provides the reader with a significant foundation with which to gaze upon God and his purpose in this world. But the temple theme isn’t presented without reference as though it the authors’ efforts were imaginary aspirations. Rather, the reader will encounter citation after citation, and I mean citation after citation of biblical references. It will be clear to the reader that Beale and Kim have done their homework, and to the benefit of the reader, they have clearly presented the fruits of such labor.

God Dwells Among Us: Expanding Eden to the Ends of the Earth by G. K. Beale and Mitchell Kim is a clear and persuasive exploration into one of the most important themes of biblical theology. Beale and Kim have effectively presented a practical and engaging vision of God’s covenantal purpose for mankind that is firmly positioned within the context of the entire canon. The practical significance of such will be enough to radically alter the way you read the Scriptures and understand the mission of God in this world. God Dwells Among Us has provided a clear example of biblical theology par excellence. I am confident that your head and heart will be connected in all their proper places. It comes highly recommended!

One thought on “Review: God Dwells Among Us”