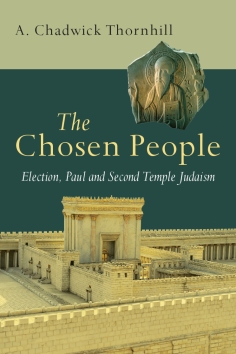 The Chosen People: Election, Paul and Second Temple Judaism by A. Chadwick Thornhill (PhD, Liberty Baptist Theological Seminary) is an exploration assigned the task of carefully guiding the reader through the early Jewish literature of the Second Temple period, specifically to examine how it discusses the concept of election in relation to the people of God. Thornhill seeks to answer two foundational questions: (1) How did Jews during the Second Temple period understand the nature of their election? And (2) how does one’s understanding of Jewish idea(s) of election influence how one might understand the key Pauline texts that address election? (p. 20-21).

For Thornhill, the early Jewish literature of the Second Temple period (namely the Dead Sea Scrolls, Apocryphal, and Pseudepigraphal works) predominantly display an understanding of the concept of election that is firmly positioned both corporately and conditionally. Still, when the concept of election explicitly relates to the individual, Thornhill argues that the literature of the Second Temple period predictably emphasizes the character or role of the individual, rather than the salvation. Although Thornhill rightly acknowledges the artificial nature of distinguishing between “individual” and “collective” from the text itself (p. 28).

Thornhill does an outstanding job systematically walking the reader through the literature of the Second Temple period in relation to the concepts of election. The reader will certainly learn a lot as the framework is being built to discuss Paul. Nevertheless, as someone who is not well-read in Second Temple literature, I often found myself wondering if any literature of the period actually disagreed with the central premise of the book. Of course, this may be the very point that Thornhill is seeking to bring to light. Still, the reader does not encounter much by the way of interaction with Jewish texts that seemingly oppose the argued concepts of election, nor is much attention given to opposing interpretive positions of the literature.

Following the construction of the framework of the Second Temple period, Thornhill directs his attention towards a number of important Pauline “election” passages. If the reader is familiar with the soteriological debate that stands in the foreground of these passages, then Thornhill’s exegetical conclusions will be nothing new—how he gets there may be a different story. For example, Thornhill argues for a corporate election view “in Christ” of Ephesians 1-2 based largely on the verbal forms in vv. 1:3-12 (p. 180), as well as a corporate election view of Romans 9. Thornhill functions extremely well within the framework of first-century Jewish thought as he exegetes the Pauline passages, and argues quite persuasively for his intended position.

To be honest, I was a bit surprised not to find any references or interaction with The Justification of God: An Exegetical and Theological Study of Romans 9:1-23 by John Piper (Baker Academic, second edition, 1993). This was one of the main disappointments for me. The judicious exegesis of Romans 9:1-23 presented by Piper in The Justification of God is in many ways definitive in the theological community Thornhill is arguing against. Thomas Schreiner is well-represented and engaged, and to Thornhill’s credit, but not a word is given about the important work by Piper. Nevertheless, Thornhill’s work is very well-documented and his interaction is admirable.

The Chosen People has offered the scholarly community a unique and important contribution to the conversation within Pauline studies. Thornhill has effectively probed through the forest of an old theological debate with fresh and exciting lenses. Even someone, like myself, who disagrees with the many of the conclusions that Thornhill advocates will find great benefit in this book. It has helped me re-engage a seemingly stagnant discussion with a renewed perspective and desire to invest more time in the understanding of early Jewish literature of the Second Temple period for New Testament studies. Those interested in a similar fate will embrace this book with open arms. The Chosen People comes highly recommended!

I received a review copy of these books in exchange for and honest review. I was not required to write a positive review. The opinions I have expressed are my own. I am disclosing this in accordance with the Federal Trade Commission’s 16 CFR, Part 255: “Guides Concerning the Use of Endorsements and Testimonials in Advertising.