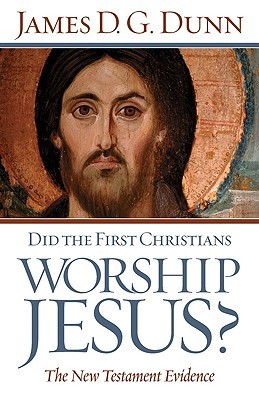 James D. G. Dunn is no stranger to the world of Early Christianity. In fact, it has been said of Dunn, “Anyone who is interested in the rigorous study of early Christianity and who has not engaged with the works of James D. G. Dunn is not really interested in the rigorous study of early Christianity” (The Holy Spirit and Christian Origins, 2004). Dunn is Emeritus Lightfoot Professor of Divinity at the University of Durham. He received an M.A. and B.D. from the University of Glasgow and a Ph.D. and D.D. from the University of Cambridge. He is the author of numerous books, including, The Evidence for Jesus (1985), Romans 1-8 & 9-16 in the Word Biblical Commentary series (1988), Jesus Remembered, Christianity in the Making, vol. 1 (2003), Beginning from Jerusalem, Christianity in the Making, vol. 2 (2009), as well as the present volume and the subject of this review: Did the First Christians Worship Jesus?: The New Testament Evidence (2010).

Everything that I have read by Dunn has been well-written and thoroughly engaging. He is consistently both scholarly and accessible to the average reader, and Did the First Christians Worship Jesus? displays the marriage of these two realities well. Though it must be said that the content within may not be easily welcomed by conservative evangelicals. The book begins with a brief introduction where Dunn reveals his conversation partners—Richard Bauckham and Larry Hurtado—and builds the case for his investigation with a number of sub-questions that become the focus of the subsequent chapters. The thesis of the book is also laid on the table twofold: (1) for the first Christians worship of Jesus was a way of worshiping YHWH, and (2) the contemporary worship of Jesus now witnessed is only possible or acceptable within what is now understood as a Trinitarian framework (p. 6).  In Chapter one Dunn examines the language of worship in the New Testament as applied to Jesus. He concludes that there is no real concrete evidence that worship language, as applied to God, was ever directly applied to Jesus. According to Dunn the worship language found within the New Testament was never explicitly directed at Jesus, rather it was directed at God for Jesus (p. 27-28). Chapter two carries much of the same theme of ambiguity as Dunn examines at the practice of worship in relation to the person of Jesus (i.e. prayer and sacrifice). Dunn writes, “in earliest Christianity, Christ was never understood as the one to whom sacrifice was offered, even when the imagery of sacrifice was used symbolically for Christian service” (p. 56).

As Dunn moves toward the topic in closer detail, chapter three addresses the topic of monotheism, heavenly mediators, and divine agents. This was an interesting chapter and most readers will likely find it to be a highpoint in the book. Dunn examines Paul’s reframing of the Shema, the divine personification of Spirit, Wisdom, and Word in light of the early Christian claims about Jesus, as well as exalted human beings such as Moses, Elijah, and Enoch. Dunn historically concludes that none of these entities were treated as a rightful recipient of worship, and thus either was Jesus to the first Christians. The final chapter is the heartbeat of the book and crucial to Dunn’s thesis. If the reader is able to read only a single chapter from the book this is the chapter to read. In chapter four Dunn address a number of stimulating topics related to the proposed question of the book, such as Jesus’s view of monotheism, the New Testament texts that appear to refer to Jesus as YHWH (i.e. 1 Corinthians 8:6; 15:24-28), as well as related issues within the Fourth Gospel and Revelation. As the book concludes Dunn warns the reader of the dangers of an oversimplified answer to the question. It’s not that simple according to Dunn. So, did the first Christians worship Jesus? Dunn concludes, “No, by and large the first Christians did not worship Jesus as such . . . so our central question can indeed be answered negatively, and perhaps it should be” (p. 150-151).
As stated above, everything that I have read by Dunn has been well-written and thoroughly engaging. He is consistently scholarly and accessible to the average reader, and Did the First Christians Worship Jesus? displays the union of these two realities well. Nonetheless, the content within this book may not be as easily welcomed by conservative evangelicals. Still, Dunn will make you think long and hard about your reading of Scripture and history. While I would largely align myself in opposition to Dunn’s conclusion, and in full disclosure did so prior to reading the book, I personally discovered many benefits in his contribution to this ongoing conversation. Consequently, Did the First Christians Worship Jesus?: The New Testament Evidence is a commendable book, and I am certain that it will be enjoyed and discussed often by the interested reader.