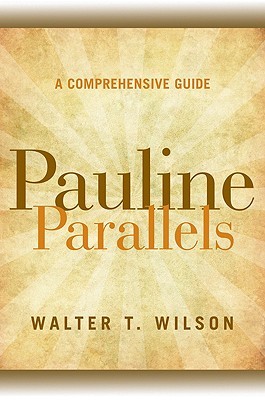 Walter T. Wilson is Professor of New Testament at Candler School of Theology, Emory University, in Atlanta, Georgia. Wilson received a BA from Johns Hopkins University, as well as an M.A. and Ph.D. from the University of Chicago. He has authored a number of books, including, Love Without Pretense: Romans 12 and Jewish Wisdom Literature (1991), The Mysteries of Righteousness (1994), The Hope of Glory: Education and Exhortation in the Epistle to the Colossians (1997), The Sentences of Pseudo-Phocylides (2005), and Philo of Alexandria: On Virtues (2010). Wilson has also published articles on the Sermon on the Mount and the letter of James. Prior to the release of Wilson’s most recent work he published this present volume, Pauline Parallels: A Comprehensive Guide (2009), which aims to present a parallel journey through the Pauline epistle—a journey built largely upon the success of an earlier volume by Fred Francis and Paul Sampley.

There are a number of distinguishing features that set Wilson’s volume apart from prior works. For example, the parallels chosen for this volume are based largely on the similarity of specific terms, concepts, and/or images between passages (ix). Previous volumes focused more narrowly on the similarity of literary structure and/or form between passages. Additionally, the translation chosen for this volume is the New American Standard Bible (1995), which is particularly well suited for the task of the volume, since it is among the most literal translations available (ix). Wilson’s Pauline Parallels covers the entire Pauline corpus. Following the discussed text, which is organized canonically, Wilson has formatted the volume into four section: (1) parallels from the same epistle, (2) parallels from other Pauline epistles, (3) parallels from biblical passages outside the Pauline corpus, and occasionally (4) noncononical parallels. Apart from the overall structure of the volume, Wilson has also combed through the parallels and emphasized the key phrases, terms, and/or images drawing the parallel for the reader.

Having used this resource while teaching through the Letter to the Romans, I can attest to its usefulness firsthand. First, I greatly appreciated the format of the book, from the order of the content to the execution of the layout. It was easy to use and helpful for sermon preparation. Second, Wilson avoids passage to passage parallels and focuses more on the paragraph level. This allows the reader to gather the full thrust of Paul’s argument, and thus cultivates more usefulness for the emerging parallels. Third, the noncanonical sources, while only employed occasionally, are strategically selected to best fit Pauline thought. Source include apocryphal and pseudepigraphal works, Mishnah, Nag Hammadi Library, Dead Sea Scrolls, and many more. Fourth, the tedious work of combing through each passage and parallel passages to individually emphasize the intended correlations is worth the cost the book alone. Wilson’s labor truly becomes the reader’s reward.

If you are looking for a resource that will help you better understand the Pauline epistles then Pauline Parallels: A Comprehensive Guide is the ideal tool for you. You will be ushered into the mind of Paul like never before. In working through Romans, Wilson has truly given me a set of peripheral lenses with which I am now able to view the letter and see what is coming or had passed through my blindspots. For this, I am immediately grateful and I foresee this resource getting plenty of good use. If you are a pastor, teacher, student, or just an interested layman, this is an essential starting place for Pauline studies, and it is well deserving of a spot on the bookshelf—preferably within reaching distance.