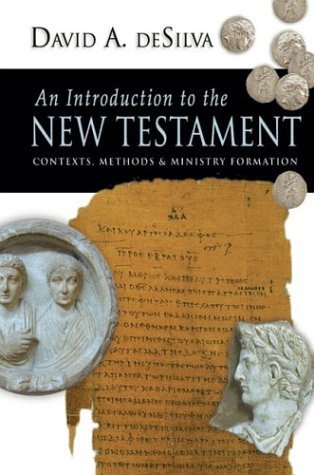 David A. deSilva is Trustees’ Distinguished Professor of New Testament and Greek at Ashland Theological Seminary (ATS) in Ashland, Ohio. He has an M.Div. from Princeton Theological Seminary and a Ph.D. in New Testament studies from Emory University. In addition to his current tenure at ATS, deSilva has authored numerous books, including, The Jewish Teachers of Jesus, James, and Jude: What Earliest Christianity Learned from the Apocrypha and Pseudepigrapha (Oxford, 2012), Introducing the Apocrypha (Baker Academic, 2002), Honor, Patronage, Kingship & Purity: Unlocking New Testament Culture (InterVarsity Press, 2000), Perseverance in Gratitude: A Socio-rhetorical Commentary on the Letter “to the Hebrews” (Eerdmans, 2000), and many more. He has also co-authored several books and worked on a number of major Bible translation projects, as well as served as the Apocrypha Editor for the Common English Bible. Nevertheless, despite his grown bibliography of authored books, deSilva’s landmark work remains An Introduction to the New Testament: Context, Methods & Ministry Formation (InterVarsity Press, 2004).

An Introduction to the New Testament seeks to blend two rather different ways of reading and searching the Scriptures—a devotional reading of Scripture with the focus of hearing from God, and an academic study of Scripture that focuses on understanding the text within the historical and cultural context (p. 20). It is within this reality, the equal nurture of an integrated approach to the Scripture, which deSilva guides the reader through the text of the New Testament. Accordingly, deSilva takes a “text-centered as opposed to a phenomenon-centered approach” (p. 21). In other words, deSilva is primarily interested in “the context, production and message of each text, in the pastoral challenges each addresses and in the way each author brings the revelation of God in Christ to bear on those challenges” (p. 21). The layout of the book is intentionally centered on this focus. Each chapter opens with a section dedicated to the historical and/or pastoral context of the writing and ends with a dedicated section equally devoted to ministry formation from each of the New Testament books. Between these chapter bookends the reader will find a goldmine of information, including discussion on text development, use of literature in the other early Christian resources, exegetical skill sections, themed discussion around the message of specific writings, and much more.

The highlights of An Introduction to the New Testament are numerous. First and foremost, I found deSilva’s approach to the New Testament extremely helpful in finding immediate practical application. This is not the case with many other introductory works on the market. The balanced approach that deSilva seeks to take is difficult to accomplish (as attested by the landscape of the current market), but An Introduction to the New Testament is well-executed. This is primarily due to deSilva’s recognition of the New Testament as a pastoral response (see pp. 29-36). Second, the inclusion of an “Exegetical Skill” section within each chapter, functioning to better assist the reader in cultivating the appropriate exegetical methodology with which to approach the New Testament, is well-received. There are a number of notable thematic articles that the reader will discover within this section, including, interpreting parables (Luke), word studies and lexical analysis (Colossians and Ephesians), feminist criticism (Pastoral Epistles), and postcolonial criticism and cultural studies (Philemon). Third, throughout the volume the reader will encounter the cultural sensitivity deSilva brings to the New Testament. This is primarily driven by deSilva’s longstanding work with the intertestamental literature and the cultural context of the New Testament world—an expertise that should be appropriately welcomed in an introduction such as this present volume.